What’s it all about, Alfie? She’ll tell you

Apr 17, 2020: Most golf writers have covered other sports and that’s why they like the golf beat so much. They know golfers are the most accessible athletes on the planet and that women golfers, epitomized by the LPGA Tour, are truly special. Simply put, the better you know someone the better you can write about them. Few share their innermost thoughts more freely than Helen Alfredsson.

Alfie, who turned 55 on April 9, won seven LPGA events, including a major at the 1993 ANA Inspiration. In all, she took 25 titles on five tours – LPGA, LET, ALPG. Japan LPGA and the Legends Tour, where last year she captured both the Senior LPGA Championship and the U.S. Senior Women’s Open.

Helen doesn’t so much play with her heart on her sleeve as she plays with her sleeve on her heart. She lets you feel its beat. That’s not to say I haven’t been in Alfie’s doghouse – at times I’ve had a room of my own there. But even that was special. With Alfredsson it is always real – and usually really fun.

In my years as a journalist, I’ve written about championships in baseball, football, basketball, tennis, boxing and the Winter Olympics among others. Covering the LPGA Tour, the LET and the Symetra Tour is the best job I’ve had. And Alfie is one of those who makes my heart smile at the mere mention of her name.

“I like to be able to do it when the fire gets in your belly,” Alfredsson said last October after closing with a 70 on the difficult Pete Dye Course at French Lick to hold off Juli Inkster by three strokes in the Senior LPGA. “I’m pleased I was able to keep it together.”

Alfie didn’t always keep it together, which is why she’s so compelling. She’s always engaged in the struggle we all know so well – working to get the job done during trying times. That’s a feeling we can all relate to now and why Alfie is so inspiring.

Watching Alfredsson is to study an imperfect genius. Her pre-shot fidgeting gives way to a post-shot body language that speaks in an unknown tongue but eloquently communicates her joys and disappointments. It all shouts what an enormously talented athlete she is, a consummate feel player who lets us all in on what she is feeling.

“Everything is such a struggle,” Alfredsson said about the cold and wind during the final round at French Lick. “Nothing is smooth. You just need to get away with what you can. But I hit some great shots down the stretch.”

That describes Alfie’s career: Everything is a struggle; nothing is smooth; get away with what you can get away with; hit some great shots. After her victory at French Lick, Helen went to the volunteer tent to thank them and danced her way into their hearts to the sounds of the Elvis Pressley classic Jailhouse Rock.

How does one celebrate a Sr. major title at the volunteer party? Alfie never disappoints. 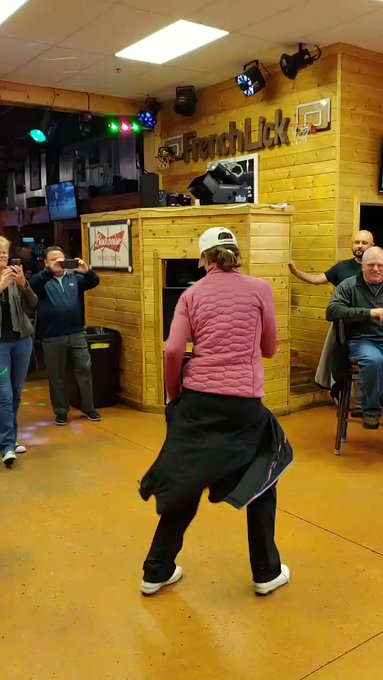 80 people are talking about this

But at Pine Needles, Alfie didn’t let the title get-away. After a double bogey on No. 5, she finished with 13 consecutive pars for a 72 that put her at 285, two strokes better than Inkster and Trish Johnson.

”I’m at a loss for words, which is rare for me,” Alfie said. Then finding those words, she added: “Elated. Exhausted. It’s just hard to believe, especially because of how we struggled today.”

There’s that word again – struggle. With Alfie was her significant other, former hockey star Kent Nilsson, who won a Stanley Cup with Wayne Gretzky and the Edmonton Oilers. He was Alfie’s caddie and sounding board for her on-course running dialogue, functioning as a silent therapist.

Nilsson, known as “The Magic Man” for his skating ability, is also a piece of work. Looking a little impish in his porkpie hat, when I told him Gretzky said he “might be the most-skilled hockey player I have ever seen in my life,” Kent replied: “Wayne is a shrew judge of talent,” a smile creasing his lips only after the words had settled in.

Alfredsson earned my respect nearly 20 years ago with her honesty, intelligence and kindness when I was working on a story about how players handle disappointment. We revisited that Women’s Open at Indianwood in 1994, where she was 13 under par and seven strokes ahead after 43 holes only to finish T-9, eight strokes behind Patty Sheehan

“On the ninth hole [of Saturday’s third round] I knocked it to three feet and three-putted,” Alfredsson told me. “When I walked to the next tee I was saying to myself: ‘There is no chance I can do this, there is no way I can put this ball in the fairway.’ It was like I had lost complete touch with myself.”

With that three-putt, Alfie played 18 holes – the final 11 on Saturday and first seven on Sunday – in 85 strokes.

“It was as if the carpet had been pulled out from under me,” she said. “It happens to feel players. You have to feel it to deliver. I didn’t have technique to fall back on. It just kept happening and I didn’t know what was happening. It was just not meant to be. It is like your head and your hands and your feel are not there.”

Then she said the words that indicate how well she understands herself and why it is so enjoyable to be in her presence.

“Sometimes I wish I were more robotic,” she said. “It would make me a better golfer. But I also know I do not want to live life as a robot.”

When told her victory in the Senior Women’s Open earned a spot in the U.S. Women’s Open, Helen said about her life after the LPGA Tour: “I got away from the pressure. I’m liking that.”

What Alfredsson did instead was go on a golf trip to Scotland with Kent and some friends and then to the Solheim Cup to do TV commentary.

That interview with Alfie nearly 20 years ago was on the practice green before the LPGA Tour tournament in Phoenix. As we stood in the hot sun, she looked at me, under-prepared for the weather, and said: “You need some lip balm.”

The next day, when I got the media center, there was an envelope with lip balm and a note from Helen saying: “You looked like you need this.”

I still have both the note and the lip balm. And I have a bunch of memories from covering Helen Alfredsson – both from inside the doghouse and outside it. All of them are precious.

Alfie the Great is a perfect example of why it’s different out here. She’s one of a kind.

Latha is a senior editor with GolfingIndian